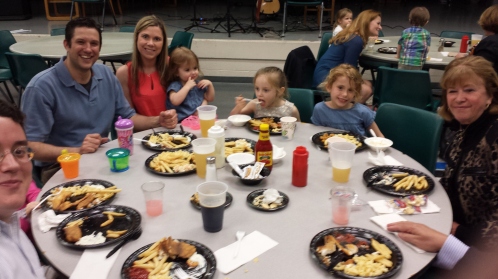 After the final customers had left our charitable organization’s annual fish fry last week, there was a significant amount of clam chowder left. After I informed one of the other workers about that and suggested he fill some to-go containers, he asked, “Can I selectively skim it so I get more clams? I didn’t think there were enough in the bowl I had. And I really think the potatoes should’ve been a little more tender.”

Now, we haven’t seen the financial totals, but between 4:30 and 8:00, we served over 600 people all you can eat baked or fried tilipia, shrimp, mac ‘n cheese, fries, crab-shrimp-artichoke dips in line, ice cream– and that chowder– provided free (donations accepted) beer, wine, tea and lemonade, and had both a bluegrass trio and the ACC tournament on a big screen TV for entertainment. No doubt in anyone’s mind the event had been a huge community success once again.

Those comments about the chowder were actually true though, which makes for a great analogy about the search for a new home: There’s almost no such thing as a 100% perfect house.

Customer satisfaction with the home buying process doesn’t rely just on price, or having granite counter tops in a super-large kitchen, a well-situated bonus room for Mom’s internet company office, a fair amount of yard, 2 1/2 bathrooms, and 2,150 square feet of space on a quiet cul-de-sac in a desired school district. It would certainly SEEM like everything is in apple pie order if buyers could check off that many favorable factors, but any real estate agent will tell you, everyone wants More.

In the hot-hot Charlotte market, clients probably only get one shot at really liking a house. If they aren’t pre-qualified and ready to make a decision-offer, the next people in the door almost certainly will be.

“Gee, we’re going to have to paint that room something besides Carolina blue,” or “We really wanted to be a little closer to X, the yard isn’t enclosed, the 4th bedroom is a little small, the homeowners association dues are kind of high,” are common enough examples of Wish List.

Unless someone has to move NOW because of a company relocation or similar situation, it’s rarely *just* the house that’s being considered, and that’s when having clients keep a Top 5 checklist in hand makes a difference. (Schools? Yes, you’ve told me its third..)

Most agents will put The Perfect House idea in perspective at the beginning of the process by asking what a client needs, then “If there was something else, what would that be?” and probably even a “If one more thing would make it perfect…” type question.

Beyond all the what if…? desires though, the single biggest factor in the hot-hot Charlotte market is that clients probably only get one shot at really liking a house. If they aren’t pre-qualified and ready to make a decision-offer, the next people in the door almost certainly will be. Those dreadful days (years!) when buyers could dither over fourth bedrooms or expect major concessions on closing costs by the seller are history.

Like more tender potatoes, or the abundance of clams in the chowder relative to 600 smiling faces, free beer and entertainment, or even a highly successful fundraiser, the buyer of today has to know what really counts for them.

Buying a home is one of the biggest and most stressful decisions people make; its a commitment right up there with marriage. If you (with your agent’s enabling) want to continue searching for that specific seventh aspect, that’s your prerogative.

‘Settling for’ is not the answer, but when a fourth or fifth strong possibility goes under contract while you thought about things, recognize how serious your Top 5 is to fulfilling both a need for shelter and an overall happy home.