If you only have the attention span or ability to focus on a single subject at a time, what would be on your mind today? Many would say ‘Remember 9-11!’ and that would certainly be appropriate. A large number would undoubtedly select some sliver of the on-going saga of Trump cruelty/BS policies-Mueller investigation-possible impeachment-upcoming elections, and more than a few would point to (as of yesterday) a Category 4 hurricane named Florence that is bearing down on the Carolinas.

The anticipation of a Thursday landfall is a Reality, but it’s not necessary to forget about the other two.

9-11 of course, is a significant historical event, a devastating attack that was truly world-changing. The second has been a slow-rolling situation that has split this country in ways that only Vietnam or our incredibly bloody Civil War of nearly 160 years ago (‘The War of Northern Aggression’ in these parts), but that hurricane is almost here and very Now. Having seen the flooding and destruction from a close hurricane pass for eastern North Carolina a few years ago, yikes. Recognizing that when they say GET OUTTA THERE! so publicly to several million people, you reallllly should do something to prepare for the potential worst.

Last night I congratulated a gal-pal who bought her way out of a shared condo lease about a half-mile from the South Carolina shore just a month ago. It looked like a financial disaster then, more like a gift now.

Here in Charlotte, NC, almost 200 miles from the coast, nobody has forgotten Hugo (1989), and while there was a semi-freakish confluence of two pressure systems that essentially ushered-spun it this way after it hit Charleston, I’m not feeling immune to possibility it happens again. Back then, a good-sized tree came down along side of my brother’s house vs. on it, but more importantly, *I’M* here now, and current house is surrounded by large, OLD, oak trees.

Politically, I’ve checked my voter registration and will do my part to remove Trump from a position on the world stage that he’s deliberately butchered, starting with the House, but I’ve never had to dig out from under a natural disaster (or a bombing either), and yes, that brings a certain pause to all other parts of Life. 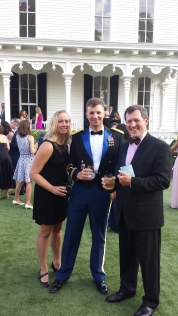 Watching ‘The 2000’s’ on TV the other night, will praying do anything about 8-10 inches of rain an hour for several days that Katrina did to New Orleans or more recently, Houston? Here in ‘The Buckle on the Bible Belt’— and bless what the legendary late Billy Graham epitomized as a messenger of God plus over 1,100 churches listed on Google might mean—its going to be a tense week, considerably longer if we take a direct hit.

Last night I congratulated a gal-pal who bought her way out of a shared condo lease about a half-mile from the South Carolina shore just a month ago. It looked like a financial disaster then, more like a gift now. I still object to the kind of disaster relief that rebuilds homes in a place that will almost inevitably be destroyed again, but its not mine either, and that certainly counts in a significant way.

Right now it’s a terrific September morning, Carolina blue sky with a smattering of fluffy clouds. That’s probably how it looked to New Yorkers that evil, disastrous day 17 years ago. I’ll never forget how a co-worker hung up her phone and said, “An airplane just crashed into one of the Twin Towers!” and opining that was unbelievable accident, not knowing it was a BIG plane vs. just a two-engine Cessna or such. That a second plane hit the other tower and this country watched an almost surreal scene unfold all day—with three more planes-as-bombs elsewhere– was as big as anyone could imagine, a modern-day Pearl Harbor of fanaticism.

One group of passengers—and the memory of a ‘Let’s roll!’ final word of determination has produced goosebumps like I haven’t had in a long time– forced one terrorist piloted plane to crash in Pennsylvania instead of allowing it to continue on its murderous mission of crashing into the White House, and that’s something we should have a collective, ultimate respect for.

It’s awesome that we have people who care about others enough to sacrifice themselves, which is how our military-police-first responders are somehow rigged mentally. Its almost hard to believe Nike chose an out of work QB vs. those cops and firemen of 2001 or a Pat Tillman, who left his job playing football in relative safety to give his life in Afghanistan- as worthy of an advertising campaign and rolling it out this time of year. Even knowing, and agreeing with, the reason Colin Kaepernick started kneeling in protest, its not like they didn’t know there were better examples.

The many who ran towards that disaster instead of away are justifiably held in awe, and if the NYPD and NYFD hats and shirts don’t come out as often as they did in the early years, that’s on us for forgetting.

In a simple, definitely personal and political thought, we can only hope those people we elected to represent our interests as a country, who SHOULD do something about the wrongness and despair caused by wrong-headed and often enabling inaction in Congress– based only on self-interest of a political party– somehow gets a similar ‘Let’s go” spine.

As for the hurricane, we have a spare bedroom…

One thought on “911, Mueller-Trump, or a Hurricane: Which one should have your attention?”