First off, I’m not a Grinch-type, nor do I have an attic full of ornaments and lights and reindeer waiting to be planted on the front lawn. I have yet to try peppermint latte, and while I have a red stocking hung by the chimney with care, its more because my Dad made them for all four boys about 1,000 (okay, 50-something) years ago, with our names in felt and a glittery star at the toe. Putting it up is a reminder how we– and I include family and the many, many friends he treated so kindly– miss his cookies and good cheer. Like Santa Claus, everybody liked Dad.

Several cousins are coming to visit this holiday season, mostly because they want to be with Mom, who at 84 moved to the assisted living side at her senior community at the end of August, but hopefully because we haven’t seen each other in a while. Frank– who was Skip for the first thirty years I knew him– retired this year, and he is financially set to do whatever the heck he wants over the next couple years. He even mentioned going to Minnesota for some *really* cold weather, not something you normally hear from a true Florida Boy. He’s got three terrific kids, as do two of my brothers, Steve and David.

That’s where the ‘Tweener’ thing comes in, because having someone truly special in life to share such times with is way ahead of wondering what you can or should be considering gift-wise. While I could actually use a new basketball, how fully I’ll throw myself into this season of cheer is open to debate. I’ll drink your spiked egg nog, I’m good with any Woman who wants to walk around with some mistletoe and surprise me– hopefully its a worthwhile kiss– and I travel with a small bag of food behind the seat in case I run across someone on a street corner who needs a break from that necessary worry, even for a day. I’ve got six stamps on hand, so a couple people get cards. 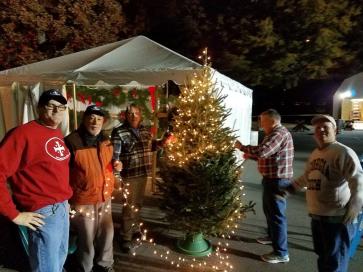 Okay, I just signed up for a Hawai’ian pig roast, and my experience on that is, no problem smiling about next Saturday. Brother Steve has an oyster roast on 23rd, and THAT’S always a winner, with enough testosterone–guys only at this event–  to float a battleship. Our church group’s 33rd annual Christmas tree sale ends in a couple days, and that’s been an uplifting experience, too.

The hitch of not being a Grinch– a role that’s soooo easy to slip into– or (overly) Super Positive Person for holidays– is over-thinking the Why not? that kind of comes with being a single guy, mistletoe or not. Yeah, yeah, I know its supposed to be about the Christ child’s birth, Peace on Earth-Good Will towards Men (and all other categories of humanity), but isn’t there some “What about me?” when you see a hottie elf nuzzling a geeky guy in one of those super-ridiculous tree lights suits? Without being disrespectful of the many who have much less, not having a couple things to open and wow! at someone’s thoughtfulness for getting it (or perhaps a negative if you recognize its a re-gifting with zero thought), that you’re getting the coffee on (as usual) and hanging out till church, football games and dinner is a relative downer.

When brother Dave, Donna, Maria, Curtiss and his wife, Stephanie came down a couple 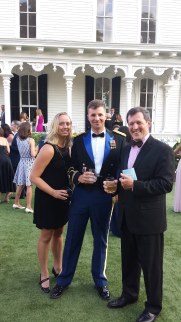 years ago it was a great couple days, and even the recent Thanksgiving I got to participate in with twenty others in Gastonia, with food and beverage aplenty, was a harbinger of why many find the holidays somewhat depressing: It doesn’t last. We watch Trump being good (for Trump, no excessive butthead Twitter-ing, and there’s got to be PLENTY on his pea-pickin’ mind right now) at President George H.W. Bush’s funeral for a couple days, but there’s no doubt in our minds that’s going to change real damn soon, right? You don’t expect a three-year old grandchild to be perfect after the 26th either.

In the bigger picture, it doesn’t seem legitimate to protest that things aren’t exactly as you’d want them to be at a specific time. I pity the millions who will make New Years resolutions for 2019, knowing that 99.7% of whatever weight, job, relationship, economic, personal or altruistic promises they make to the Universe or whomever they’re accountable to in their goal-setting awaits failure. I’ve never worried about ten pounds too much-not tanned enough for swim suit season, never sworn I’d move into a perfect new, high-paying job before New Years. I loved the insurance commercial about Mayhem, who was resigned to doing the mundane safety stuff until he found out resolutions rarely make it very far into the new year, because he could be his regular self, the pressure was off at that point.

Of *COURSE* I’ve asked for the stockings I put in my stocking to be filled appropriately with a desirable Her. What I’m going to be glad about is Mom still recognizing me (most of the time) when I pick her up for church, for Mike, who never asks for the rent money absolutely on time (unless its poker week), and if he fixes the head he broke off the choir boys cutout, I’ll be glad to put it on the porch and put some framing tree lights in the window behind them. I’ll kiss under any mistletoe when prompted, just because. I’ll watch ‘How the Grinch Stole Christmas’ (original version) with spiked egg nog and know I’m not him,  watch ‘It’s a Wonderful Life’ and consider whether I’m that kind of difference maker in other peoples lives. I will *never* say “Bah, humbug!”

That it probably only takes getting another good gig work-wise (half a loaf is still good) to brighten things brings HOPE, and isn’t that what the season is truly about? Positive expectations people, and Season’s Greetings! to all who might need a little extra cheering to make it though. I’m not a Grinch, you probably aren’t either. Tweener isn’t *bad*, not with all the alternatives and/or blessings we have to help us over The Small Stuff.

And while you’re up, could you get me another egg nog?