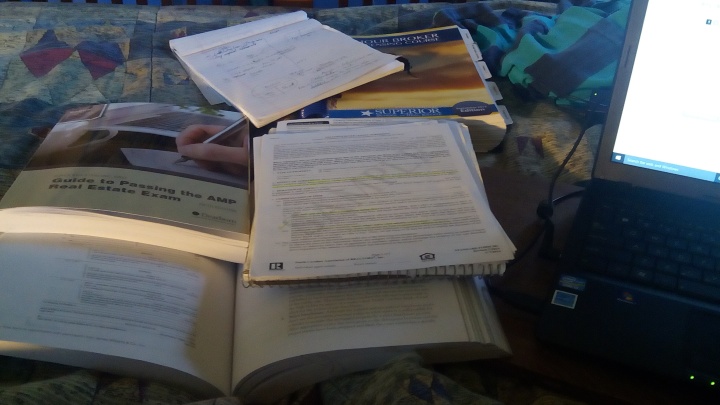 Four days, and feeling ready for what comes on Monday.

Two months after spreading the news at my 40th reunion that real estate was where my future efforts would be directed upon returning to Charlotte, NC from Schenectady, NY, the Reality of Commitment comes down to four days of almost continuous reading and testing to prepare for a more-important-to-my-future test than I’ve taken in MANY years: a 75% (two tries if necessary) qualifies for the State exam.

After watching multiple episodes of ‘Friday Night Lights’ with Blackhawk-flying, ‘promotable-to-captain’ nephew, Curtiss, and fiancee (Stephanie) during my reunion over Columbus Day weekend, the Permian Panthers “Goin’ to  States!” mantra has been locked in as my Now.

Half-way through this month of two full days (79 total hours) week in class and mucho hours reading/discussion, trying to fulfill a second goal of submitting 50,000 words for NaNoWriMo campaign didn’t make the cut as a priority. I mention that because, although tarot cards are essential to major decisions made by my main character Marlena (the Magnificent) Victoria Christie, declining to commit time to writing– an obviously significant professional factor– was an All-In! line in the sand.  Because school and studying required all possible focus, the call had to be made. That’s nothing but a straight-up fact of recognizing where and what your #1 focus is.

That is (IMHO) *still* how Success is earned, and yes, ‘deserved’ is a decent clarifier.

Our real estate class has about 70 people, and being at the same level of focus with that many articulate people, its been enlightening. At *NO* point is anyone I’ve talked to been taking things lightly. The instructor put an absolutely True point on the Next we’re all looking at with all the studying/long reading assignments: “You are all trying to become professionals– conduct yourselves accordingly.”

I’ll add that every organization or ‘system’ I’ve worked with demands results along a scale of importance: High rewards, you gotta want ’em, then go earn ’em –Amen. And Luck,  that usually follows effort.

Time-wise, it’s been a short term investment:  Started October 28, final on December 7. Exceptionally strong potential results for a short term commitment,  and there didn’t seem to be any lack of determination in most individuals; nobody expects a ’15-minute-great abs!’-type cheat that aces tests, y’know? North Carolina has some rules and gotta do’s regarding real estate, and part of that is definitely 79 hours. Being licensed as a *professional* going into 2016 is a specific goal, so this weekend is about achievement. How much-how far with this weekend’s effort-commitment means points on Monday.

The world makes way for…you know the deal, and there isn’t a WINNER! type organization worth its mantra that doesn’t push that button somehow. There were several opportunities to present myself during  lunch ‘n learns to representatives (in one case, Director of Recruiting) of specific firms  I’d previously completed assessments with. Certain results from those clearly affirmed my inner attitudes and aptitudes, then it took a ‘put it on the credit card’ action  to qualify for a major professional Next. Don’t ever imagine anything happens without actions like investing in yourself. I’ll let you know the results soon.

As a small extra, this piece written after the Panthers big win in Dallas was/is pretty good stuff. At Thanksgiving we were 11-0, looking for more in weeks to come. https://www.linkedin.com/pulse/article/yes-purrr-fect-11-0-panthers-show-dallas-what-big-d-glenn/edit