Sports often provide a ready supply of analogies for the real world, and the idea that EFFORT increases the potential for desirable results is right at the top. The Panthers star running back, Christian McCaffrey (‘The Weapon called Cee-Mack’), put that in CAPS with his 22 rushes for a paltry 31 yards in their 37-26 win, especially his try, try, 3rd time successful 1-yard TD run to start the scoring as the Panthers moved to 4-2 on the season.

Several other aspects of the Panthers game were noteworthy, but you won’t find any negative commentary regarding Tampa Bay QB Jameis Winston’s 400 yards passing (30/54, 1 TD) just a week after Jacksonville’s Gardner Minshaw II went for a 373 yards, 2 TD game. All those numbers sound pretty high for a good reason, but the reality is, when you’re way behind on the scoreboard, things like that happen. Nobody in Charlotte is worried about Jameis slinging it all over Tottenham Hotspur Stadium in London when the defense hung up a five interception-two fumble-seven sack WIN! overall.

To provide some context to the Panther efforts, McCaffrey got essentially nothing from two yards out on the last play of a Week 2 loss at home to Tampa Bay. Given the opportunity to rectify that situation, being denied again wasn’t going to happen.

Credit Coach Ron Rivera for putting faith in his offensive line’s ability to punch it in, and for only allowing two sacks of Kyle Allen (20/32, 227 yds., 2 TDs, still no interceptions), even if they couldn’t change the Bucs focus on McCaffrey.

All the top receivers got to eat Sunday – DJ Moore (7/73 yds.), Greg Olsen (4/52 yds.). Curtis Samuel (4/70 yds., 2 TDs, and a terrific catch where he took the ball away from a pasted-on him defender, and an eight yard end around) has become the super-speed threat Panthers expected when they drafted him out of Ohio State.

As for the Panthers’ hellish afternoon for Winston, in 2018 they only registered 30 sacks, and they’ve had 24 in the last four games. That’s what you call ferocious, and it looked like everyone was shot out of cannons on every snap. Nobody in the organization really panicked after that sub-par season by the defense, and several players who didn’t really contribute last year are now showing their value, with a shout out to James Bradberry, who had ten solo tackles. 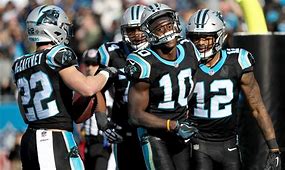 EFFORT isn’t just a coach’s wish, it’s a demand and necessity for everyone everywhere if you expect to be considered a winner, or even deserve playing time.

I recall a retail manager who always kidded me with the question, “Sure he/they are fast and tough, but can he/they get a credit card application?” at times like this. I certainly wouldn’t sweat that latter part much regarding the Panthers efforts, and we’ll see how things work after the bye week, when Panthers will travel to (currently) unbeaten San Francisco. Cam Newton might be ready to show what effort means to him in regaining his starters job.