As dramatic a negative as assassinating a Quds general in Iraq on the second day of the new year is, I’ll try remembering the little girl whose mother didn’t complain about another homeless person snoring like a chainsaw ten feet away from her five still awake children that night.

On a cold and raining Thursday, she said they couldn’t sleep because they’d taken naps that afternoon, then offered us blessings for the new year as she and the children boarded a bus to take them back downtown on Friday at 5:30 a.m.

Will four small pairs of colorful gloves and hot chocolate (but no cereal, sorry) make a difference in a child’s life for more than one day?

Two short messages: Yes, “the thought” still counts even after Christmas gift-giving, mostly because very little action comes without thought. Our shelter had a large container of gloves, why should she need to ask when it cost me nothing to do? She can lose six gloves and still be ahead, right? She’ll probably share a pair with a younger brother, so maybe *two* kids have warmer hands, and may that Panthers knit cap I gave another brother be worn proudly.

Secondly, while being aware of the ugly reality now facing so many – from a major piece of  Australia burning, to the deadly acts and accompanying outrage that will threaten the lives of so many, especially our troops in the Middle East – continuing to do what I can for those closer at hand like that family is a legitimate human-to-human plan.

Wrapped around the overnight for the homeless (Room in the Inn), I attended an open house at Queens University for the Leadership Charlotte program, and then Friday evening, the first monthly meeting of the (St. Gabriel) Men’s Club. While there were somewhat fewer than the 178 people who originally signed up to attend the Leadership event, I appreciated the kind of raucous group that filled every table Friday night.

Leadership Charlotte is an operation with over 40 years of bringing together a strong, diverse group that focuses on significant programs across a spectrum of areas to keep Charlotte moving forward. For relative newcomers, its a community effort that helped replace the previous ‘system’ of a small group of enlightened citizens who moved Charlotte from a low-key city of about 200,000 on the NC-SC border to the desirable, powerhouse location nearly a million live in today.

Church Angel’s directory list 17,119 churches of various denominations in North Carolina, but Charlotte celebrates its “Buckle on the Bible Belt” reputation, well, religiously, and most if not all have outreach programs to help the community. From mega-churches to slash store-fronts in retail locales and most corners, it is not a small consideration, especially in these trying economic and political times.

Almost all will agree that the Reverend Billy Graham was a Man of God, and that is probably as good a place to begin and end a theological discussion.

Without praising or forgetting any specific denomination, “helping others” is both a byword and above average place to start showing you care, here and now.

Put yourself out there just a little America. Volunteer to read with kids at the library, bring Johnny’s warm jacket that he outgrew in one year to wherever you learn they are collecting them. Make the lunch bags that Room in the Inn gives to those homeless over-nighters in the morning – you don’t even have to see them to know you’ve done something good. Prayers aren’t really enough, even the little actions count. 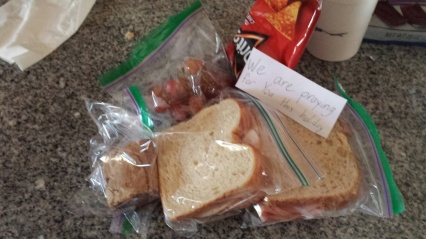