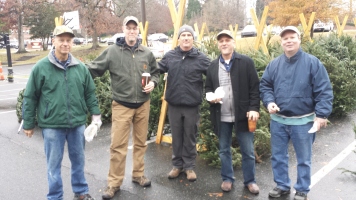 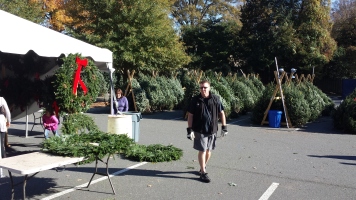 When I mentioned a Christmas Wish on timing of long-time necessary knee replacement– because who know’s what health care will look like in 2018?– it was an acute surprise when scheduler said two cancellations would mean I could have surgery the following Monday, at least if I wanted friend and highly-regarded ‘cutter’, Dr. Robert McBride.

Doc is exactly who everyone should want in such situations, you immediately know where you stand. Its cool that he comes to our Christmas tree lot and does the sales thing: just one of the guys.  This  is our clubs biggest fundraiser of the year.

After six years of very gimpy knee, I’d set this year– at age 60, and in better than average physical shape– as the time to be ‘physically whole’  again in my mind. To be rehabbing a week later AND not being $1000s in debt, was only possible by ACA coverage through Blue Cross-Blue Shield.

The speed of x-ray appointment on Tuesday and ability to be rehabbing a week later was only made possible by ACA coverage through Blue Cross-Blue Shield. Give a shout out to those people, everything I needed to overcome two major physical problems, they handled it, like this life-changing new knee and after a bicycle accident two Memorial Days ago.

That accident would have been nearly $6800 in emergency assistance, and it came down to my $100 deductible plus $325 worth of ambulance. Getting crunched on a bike path isn’t even a consideration for many young-healthy people. Even under generous terms of ACA, they often see buying health care as something they might not use, so they rely on bad luck staying clear of them. That’s kinda called ‘skating’,  and  you should be considering  buying vs. alternative of NOT being all lucky.

How thankful am I NOT to be many thousands of dollars in debt from two bumps in the road, here at Christmas? Surgery meant losing last two weeks of temp assignment at UPS, but even overtime rates wouldn’t create better economics than my DOING IT NOW with surgery. I’m going to my 2nd PT session tomorrow, first session with physical therapist was about basic exercises to keep blood clots from forming.  I’ve heard about, and am not tingling with anticipation of constipation from oxy-whatever meds.

Everyone knows I’m going for surgery– at least 1/2 dozen in our club have used ‘Doc’ and nothing but praise. The next two weeks will likely be pain filled, because PT is about *getting you walking*, and they base their Success on getting that done. I’ve always been a good patient– Good, not ‘great’. In earlier times, I played in a rugby tournament five weeks after earlier injury– doc had said ‘at least 4 weeks’. The first time I tried a fake punt move, my knee buckled on me: 9:10, done for the day. I’m thinking more of the freedom to do whatever I used to choose now, nice for the walk vs. skip across street so I don’t get run over.

On Saturday our Men’s Club decided to extend the sale, and these guys are the troops. Do I feel guilty at not being there down the stretch for our 32nd year in tree selling? Not a problem– these are cagey veterans, they know about making decisions. They take pride in finishing off the event, I believe they won’t leave extra dollars around.  Of course, the knee is the culprit, but that’s changing as we write.

Lastly, at the end of November I submitted just over 50,000 words to NaNoRiMo, which they consider having written a book. I’m already several sessions  into editing for the follow up book about Marlena the Magnificent, ‘With Platinum Warrior Focus’.  Nailing  the sequel while working over-night shifts and an epic family Thanksgiving, I’ll take credit for the W because it was a goal, clearly 100% earned.  I’ve promised myself this won’t get tucked under my bed for three years like before.

Lots of social events coming, I’m looking forward to walking around to every one of them.

2 thoughts on “My Christmas Wish for Knee–Bazinga! In 32nd year of Christmas trees, you go guys!”