Having started with Affordable Care Act coverage when legally mandated in 2015, I’m proud to announce that the replacement knee that made me physically whole again after a dozen years as ‘a gimp’ and restored my personal confidence levels, turned two yesterday.

A physical game changer at 60, replacement was the most anticipated gift I’d ever received.

After asking my doctor if I could possibly get the surgery in December, 2017, the scheduling person said, “You’re in luck. Two cancellations means one spot has opened up. The doctor is booked on the 18th, Christmas is the 25th, and after that its a new program year. You can have surgery this Monday, but you have to tell me,” and she literally looked at her watch, “now.”

After a difficult economic 2016 as a new real estate broker, getting a knee that was totally shot at the end of 2017  fixed as a long-term negative was far from a given. In the final accounting, the numbers turned out super-doable: “Obamacare” meant my maximum out of pocket – on an insurance breakdown with a $28,700 top line – was $600.  The $20 a session for physical therapy – seven weeks, twice a week – was money extremely well spent.

Thankfulness has abounded since, and I have no reason to listen to anyone knock the ACA. This past weekend I popped off an 18 mile ride without any protest or strain from “Lefty,” and while a second day of Christmas tree selling brought a minor ache, two beers watching the LSU game took care of that.

I’m a happy camper about the knee, and have said so in every survey they sent me.

Rehabbing is definitely a challenge, nothing fun

When you catch a major break like the timing and cost factors I had, you owe the Universe your very best effort in return. Whatever other exercises Amanda and Becka came up with, knowing how important a factor an ERMI was in my progress, I worked the hell out of it. 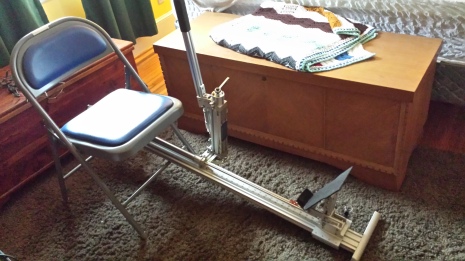 A significant extra from having Dr. Robert McBride (OrthoCarolina) as my surgeon was getting that ERMI (Extended Range of Motion Improvement) machine as a 30 day ‘loaner.’ It’s not kidding to say, with your heel in a foot-scoop, “You pull the pneumatic lever until the bend is uncomfortable, then give it another little tug, and keep that position for ten minutes.”

After taking a break, the system calls for coming back for ten more minutes and doing that twice a day. In physical therapy for knees, they quantify your progress in range of degrees, and at least for me, clicking that lever another line or three while in the ERMI saddle and channel-surfing hit an “I got this” machismo.

I believe that *every*little*bit*more*I*do* goes directly to helping the strength and functions of my knee-quad-whatever. (What I told my PT person, Amanda, often, and strangers in grocery stores even more frequently)

Its a process, and goals help

My initial, somewhat whimsical goal for being “better” involved planting my left foot without pain and being able to hit a tree with a snowball. The last time I’d tried on a trip to NY, I literally couldn’t hit the broad side of a barn. Charlotte doesn’t get snow that often, so it was a touch of luck that a decent skim appeared in late February to help fulfill that “leveling up” affirmation.

By the end of May, with the help of regular, mostly flatter 8-10 mile bicycle rides for training, I could handle my favorite urban route, one that features a three-mile stretch with several long rises about the mid-point. Thumping a forehand up the alley in tennis as an opponent flails at its passage still hasn’t been put on the official scoreboard, but I’ve killed a nearby wall.

In a captain’s choice golf event before Memorial Day 2018, I played amazingly well off the tees, STRAIGHT drives that located well and allowed better players to shoot for higher risk options. For years that knee clicked and wobbled at exactly the point I settled into an optimal swing position, which was more than just distracting. When my balance was restored, wow! Without that constant niggling, my swing came through smoothly.

That old joke about, “Will I be able to play the piano after surgery, I never could before,” that’s what solid drives felt like.

My bike ride is a working antique, a 12-speed Miyata with gears on the up-angle from my pedals instead of in the middle of the handlebars. I bought ‘Clyde’ for $125 in 1990, refurbished it for $185 many years ago, and finally bought a more ergonomically friendly seat vs. the slab of leather (see photo at top) that lasted 28 years. Riding Clyde was a saving grace, what allowed my staying in shape because it was really the only physical thing that *didn’t* abuse the knee, and biking is an almost year-round possibility in Charlotte.

Post-replacement and therapy, I honestly never expected to become the long-distance shooting threat in hoops I sort of recall being a dozen years before, when I started needing a bracier brace. Having stopped playing even 4-on-4 games six years ago – I sure didn’t want to be the guy *anybody* can drive on and they want to guard – I just wanted to move naturally. I continued catch and shoot hoops by myself over the years, but having to WALK after misses, that didn’t really square with the inner athlete.

Not having to skip across the street so I didn’t get run over made having that knee replacement a simple decision.

This October, after declining to play the previous week, I tried “going easy” for a short game to seven, shooting 4-5 with three long shots, and an assist. I’ve been back four times since, even though my doctor says, “You’re playing basketball?” with concern in his voice. (No sweat doc, I’m playing with old, broken down guys…) I resisted for over a year, I swear I know my limitations, but running after misses because I can, is another reason for thanks.

When doing a content copy writing gig for a CBD manufacturer early last year, I did several articles about how CBD’s effect on the endocannaboid system (ECS) can help with anxiety and depression.  Other research, regarding physical activity as a good overall tool on those fronts, echoed a personal mantra, and that Forever Young Boomer inside me does seem to respond well to CBD’s “focus factor,” having both going for me is terrific.

In my humble opinion, when your moment comes to pull the trigger, do it. The physical therapy is going to hurt, but do it – and then do a little bit more. Happy second birthdays depend on it.

One thought on “Knee replacement turns two, and ‘Obamacare’ is still law of the land”